There are a few classes of cars that range from LMP1, LMP2, GT, Legacy and then some. As they are packaged, they can be requested for download. So check them out !

The cars in the above slide show represent V1.3 or higher revision.

Version 1.3  cars in general are about 20-30% faster than their actual counterparts.

The objective of  V1.3: . . . to design and engineer vehicles that are Le Mans capable in simulation for FSX- to this end, these are not the usual FSX cars , where many can hit 270 mph in simulation, down the Mulsanne Straight in Le Mans 4 FSX

In fact, the cars have established their own benchmarks for lap times at Le Mans 4 FSX and Nurburgring 4 FSX, which are in fact faster than the real thing.

They have there own share of war paint,  and designed and built with very modified FSX parts and xml.

Their suspensions have been well tuned. Higher end cars, with top speeds of 240 or greater have the addition of air /speed braking. All cars have progressive down draft damping when over 130 mph.

They do not include animation yet which is expected by their Version 2.0 release.

The cars are freeware in that they are built based on public domain engineering drawings whose designs originate from the manufacturers of these automobiles.

AutoSportsSimulations.com assumes no personal right for monetary gain as respecting the fact in not being the owner of auto manufactures such as Ferrari, Porsche, etc’s designs.

It is our interest  to provide you with nice cars for the race tracks where you have parity with other drivers; where we would also like to encourage a multiplayer community that includes you!

You can request them below if you have a licensed copy of one our great major race tracks where keeping in mind that they are not an entitlement and to assure driver parity in future ASSRA Multiplayer Events, they are not to be hacked –

Simply contact us here with the cars that you request. Please include the email address that you used when purchasing your copy of one of our major race tracks and we will be pleased to make those vehicles available for your download!

Suggested installation is in your “simobjects/groundvehicles” folder

Get this set of Maserati 250F cars.

There are Six Maserati 250F’s in the series. They are tested in FSX Gold and Steam FSX. As a Set, they can provide a multi-player team a choice of six members. The series is also certified for Nurburgring / Nordschelife 4 FSX which is due to be released in early Winter, 2017.

The 250F first raced in the 1954 Argentine Grand Prix where Juan Manuel Fangio won the first of his two victories before he left for the new Mercedes-Benz team. Fangio won the 1954 Drivers’ World Championship, with points gained with both Maserati and Mercedes-Benz; Stirling Moss raced his own privately owned 250F for the full 1954 season.” -Wiki

Derived from opensource, and provided here as freeware, the Le Mans Corvette Pace car is specifically built to meet the needs for an offical pace car with a top speed in simulation of 140MPH.

These Lotus cars are great for forming a club, where more are coming on the way. So make sure you collect them !

The Lotus Super 7 is a great all around car for developing racing skills. It is also a roadster, and great as a touring vehicle. 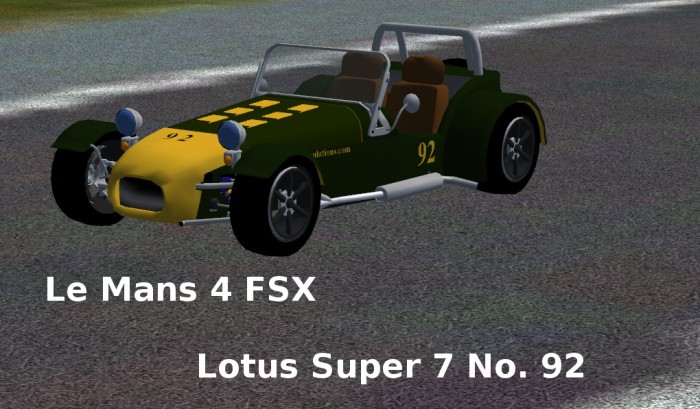 So in addition to Lapping Le Mans 4 FSX, the Super 7 is also great for exploring the World of Le Mans 4 FSX too !

Derived from open source, and as freeware. the Le Mans Lotus 2-11 is specifically built for the Le Mans 4 FSX Racing circuits. Its a race car but also a nice roadster for just touring Le Mans 4 FSX.

Note: You can enable War Powers, or manifold boost ( Green Light On ) as a button to add boost for 180 MPH down the Mulsanne Straight between the Chicanes, but make sure you disable the boost ( green light off ) when wanting to slow down or in curves like in the chicanes – 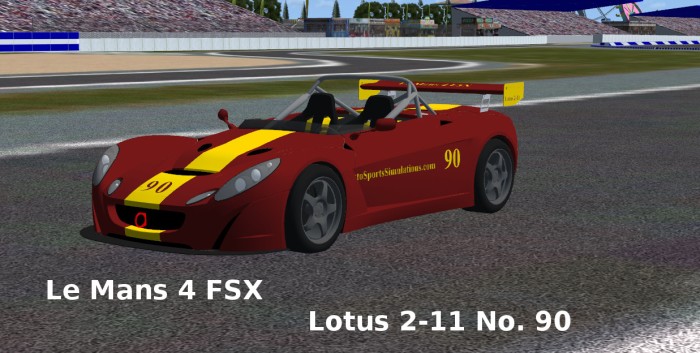